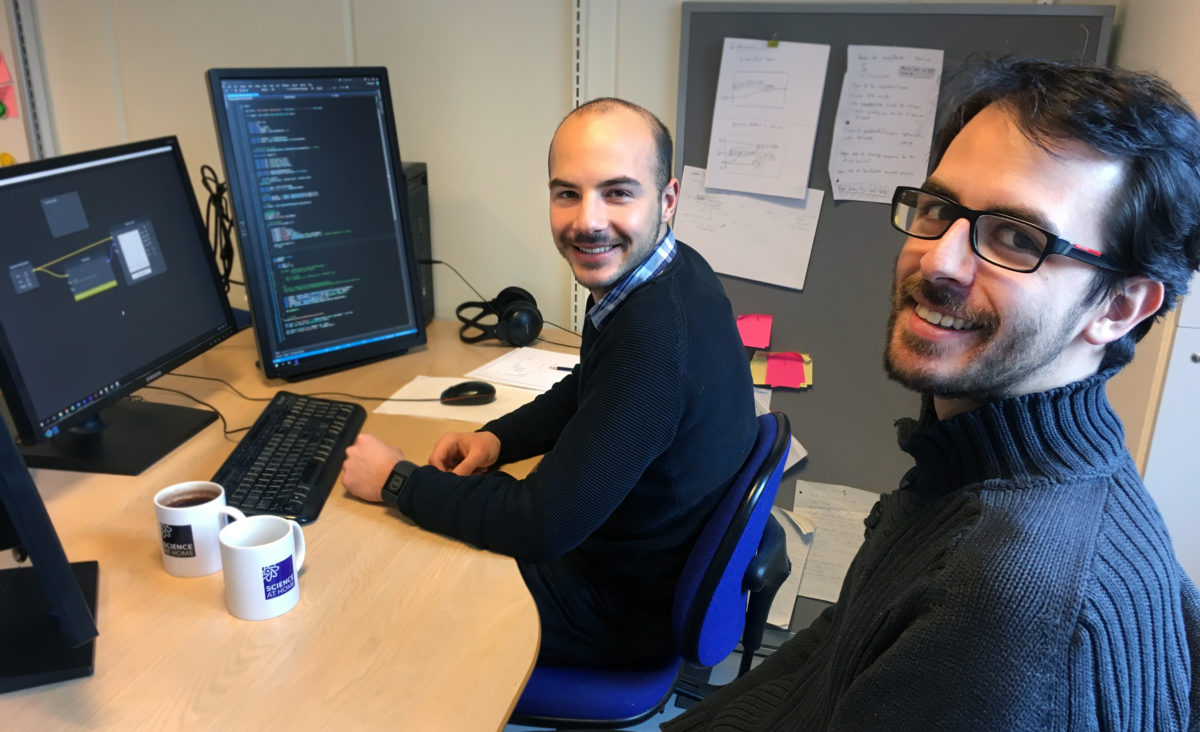 Quantum Composer is our skunkworks project: a project developed by a small group of people who research and develop a project primarily for the sake of radical innovation. On the occasion of a new addition to the team, we had a quick chat with the core team working on the project, Till Heinzel, Florian Korsakissok, Jesper Hasseriis Mohr Jensen and Jens Jakob Sørensen to talk about how this project started and where it is heading now. Unlike ScienceAtHome games, this tool is not aimed to reach every citizen. Instead, Quantum Composer is a learning tool, helping physics students throughout their studies and takes them all the way up to high-level research—”Composer is only limited by the questions which can be asked.”

What is Quantum Composer?

Florian: “It’s a quantum physics simulation tool that helps students and potentially researchers to visualize experiments. It helps them planning and they can tweak the parameters of the simulations interactively. In other words, it’s a visual scripting tool where you create a graph, connect it to other elements, thus creating an experiment from scratch.”

When students learn quantum mechanics, they do not typically have much experience with solving partial differential equations such as the Schrödinger equation. In fact, this is only possible to do in a few cases. Sometimes it is easy, in some other cases not that easy but still feasible. However, there is an infinite amount of situations when it cannot be really solved. The cool thing about doing it numerically with the help of our tool is that we don’t need different approaches to solve it because we are not trying to get an analytic, correct result. An approximate result is enough and we can work directly with that. This way, we can solve pretty much anything. We are only limited by the simulation capabilities and the methods we use.”

JJ: “The vision of this tool is to create a shortcut to do those simulations that I am able to do on my computer as a theoretical physicist during my Ph.D. It took me years to gain all the necessary knowledge for these simulations. We hope to design a way where physics students could play around a couple of days with Quantum Composer and can do principally all the simulations that I can do. Like a shortcut to facilitate the work of physics students and also researchers who are specialized in other areas.”

Who can benefit from using Quantum Composer?

Till: “The main focus is on university students. You need to be at least in the process of learning quantum mechanics to know what is happening while using this tool. The tool is ideal for university students to solve and understand their tasks from regular quantum mechanics courses. They can visualize their results directly, which is very helpful. Normally, the results are very abstract. In addition, they can take it even further and try different options that they wouldn’t be able to solve otherwise. And that’s gonna be just as easy as their starting simulation. This is the main power of Quantum Composer! Because of this extra step, there is a possibility to try things that nobody has tried before! You can investigate situations that nobody has thought of—maybe because those ideas aren’t particularly useful, but that’s the users’ prerogative.“

JJ: “It has also been used by high school students, in their final year, working on a project. However, they were students with a very specific interest in physics and looking into pursuing further studies in that direction. Using Quantum Composer certainly requires at least some knowledge of physics but the possibilities with this tool are very opened. In fact, it is only limited by the questions which can be asked. It can also help researchers in their investigation. For example, those scientists who are spending most of their time in the lab and specialized in different areas, they have less experience in mathematical calculations and simulations. Quantum Composer empowers them to create these simulations.” 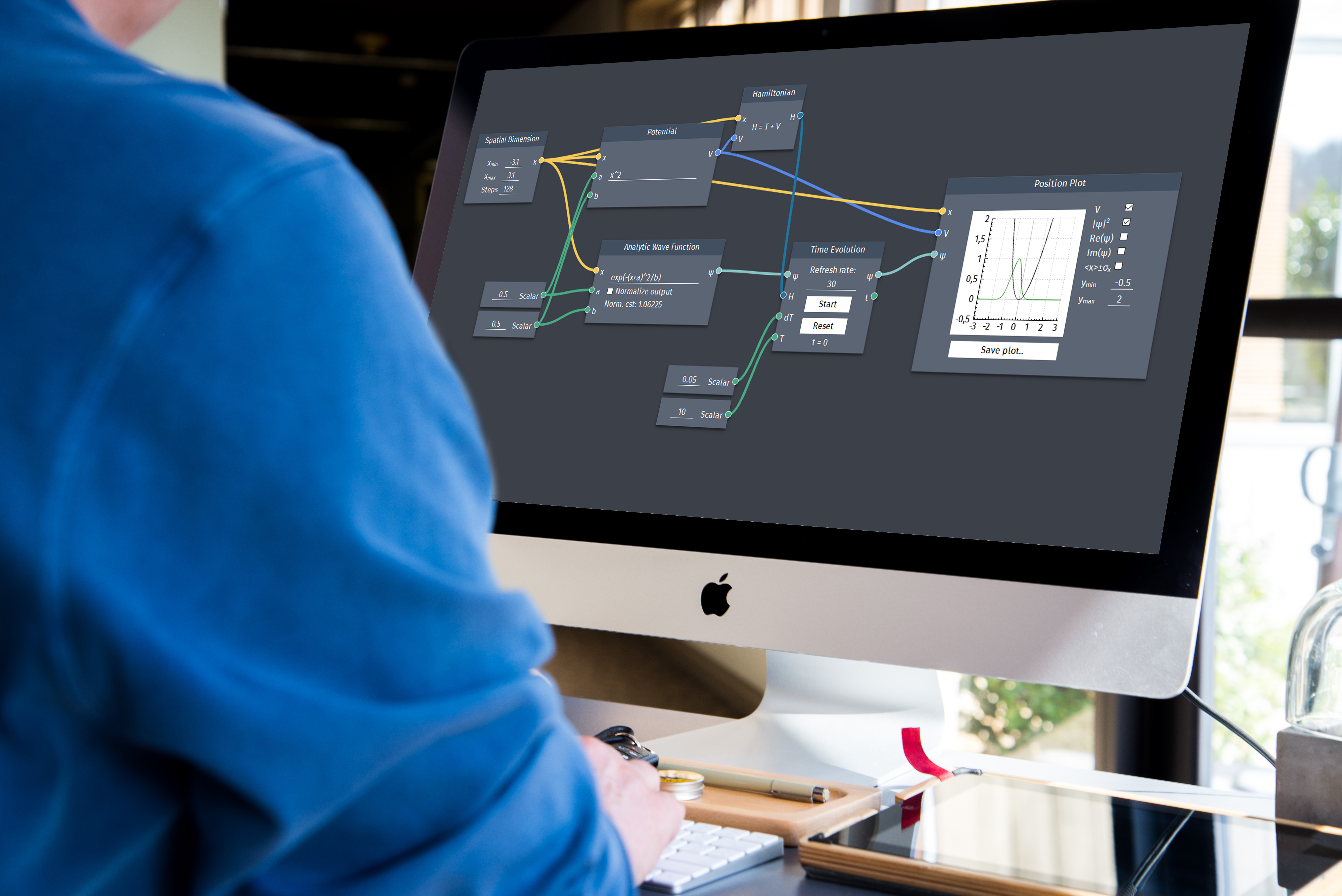 How did the idea of Quantum Composer come up?

JJ: “Quantum Moves was used in an educational setting in classrooms but for illustrating physics concepts at university level was not enough. It was built to be a game for a general audience: inviting anyone without formal education in science. We realized the need for a specialized audience to control and set up a simulation themselves. Jesper built the first, a more educational version based on the idea of Quantum Moves and it grew into the project we call Quantum Composer now. “

Till: “The first version of Quantum Composer was made in two weeks using the game engine called Unity. It was rather impressive considering the time spent on it. A funny memory is that the screen resolution had to be set to a certain value, otherwise the buttons were overlapping each other. It also gave an information overload but it was working!

At the same time, QEngine was in the process of development with the purpose of adding some kind of scripting language to it, enabling people without C++ knowledge to work with it. We combined these two ideas and ended up with the conclusion that a visual scripting language could be the best solution here. Having individual elements, the users’ wouldn’t get an information overload because they can basically start from scratch and construct everything from zero.”

So, how does the current Quantum Composer team look like?

JJ: “The prototype of Quantum Composer is available online on the website. However, we are planning to update the frontend and the interface. The UX needs some more time and love from our part to make it an even better tool to use in classrooms and for research as well. In the next iteration, we hope to sort out many frontend issues by the summer and make it easier to use. Florian and Till are working on a more accessible version now.”

Till: “Though Florian is new to the team, he is the one doing the development work. He is a software developer and we got him on board to improve the frontend interface for better usability.
JJ is the product owner—the boss. And to me, he is the interface to ScienceAtHome. He is really good at keeping an overview of the project while the rest of us tend to focus on details. He keeps us on a good track.
Jesper has been on the project for a long time as well. He made the original version and worked on the prototype as well. He’ll continue to be involved and will actually use Quantum Composer for his work. He is also involved in the related QEngine project, so he will definitely stay close.”

Florian: “Then there is Till! He is on the project for much longer than I am. He knows more about quantum mechanics while my background is software engineering. At the same time, Till acts as an interface to the rest of the group. We consult regularly with JJ and Jesper. Louise is also involved in the Composer project, as she is the Head of Didactics. She represents the educational aspect and she is also testing the utility of the tool.”

This project already took a long way in a relatively short period. After the proved success of the prototype, we hope the next version will shine even more opportunities in the future, keeping the focus on the concept of Research Enabling Game-Based Education (REGAME) and help quantum mechanics students in the process of learning and experimenting. With more focus on the interface of Quantum Composer, the ecosystem within the group is well defined and the project is ready to take to the next level!

If you are a citizen scientist without formal science education background, find more information about Quantum Composer on the ScienceAtHome website.

If you are a quantum mechanics expert, visit the Quatomic website to find out more about the potential of Quantum Composer and QEngine.