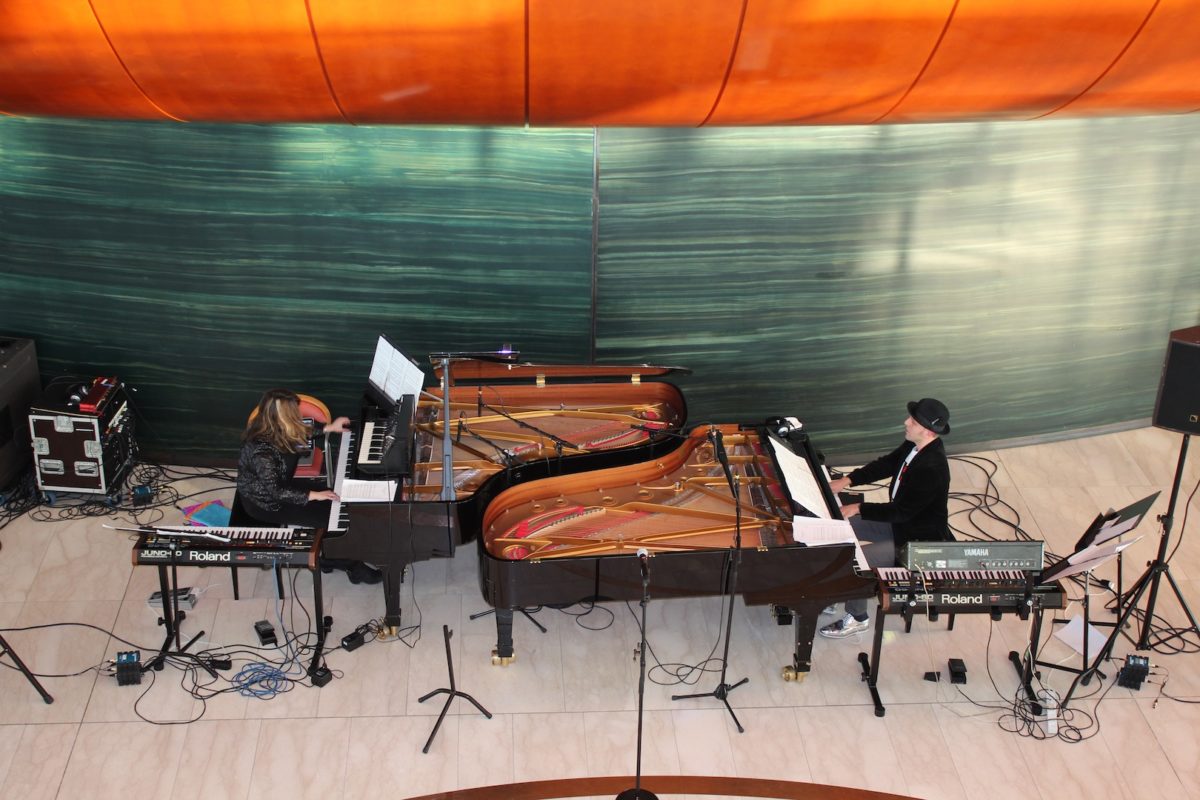 Quantum Music is a project exploring the connection between quantum physics and classical music. It’s no surprise to find one of our favorite ScienceAtHome collaborators, Klaus Mølmer, in its epicenter. Klaus works with LP Duo, a piano duet, and composer Kim Helweg to create music that juxtaposes quantum phenomena with two intertwined pianos.

At a first glance, it may not seem that quantum mechanics and music have much in common. However, both disciplines use a similar language of waves, harmonics, and frequencies. Sound, as far as physicists are concerned at least, is simply vibrations in air—and the vibrations themselves are waves of different frequencies. Similarly, atoms and other quantum objects are described in terms of wave functions. These are mathematical functions containing information about what the atom is like and how it is behaving at that moment. (If you have played Quantum Moves, think here of the wobbly liquid you move around. That’s the wave function of a single atom.) Quantum mechanical wave functions don’t translate to music easily, but quantum phenomena such as superpositions and entanglement are endlessly inspiring for musicians.

In March 2017, Aarhus and Copenhagen got a taste of Quantum Music as a part of its Culture Capital year where Aarhus Sinfonietta played the music. I took the opportunity to chat with Klaus Mølmer (Professor of Physics at Aarhus University and our collaborator at ScienceAtHome) about his musical aspirations and contribution to the project.

How did this project come alive?
K: “Quantum Music is a collaboration initiated by scientists in music, musicians, composers and some physicists. The Institute of Musicology of the Serbian Academy of Sciences and Arts is the head of this European network. Good old friends realized the possibility of a very interesting joint project with European fund—Creative Europe.
The plan of the project was to explore and illustrate effects of physics with music compositions and instruments. I entered the project by the invitation of the Copenhagen-based Danish composer, Kim Helweg, when he was looking for a physicist nearby to exchange ideas with more efficiently. I like music and play it myself, so I was enthusiastic to join. Also, since the beginning of the project, we had an idea to develop new instruments. That was a part of the project where I played a bigger role“

The first idea of the project was to promote quantum mechanics. However, it turned out to be much more. What happened?
K: “When I joined the project, we agreed with the composer to respect each others expertise and we both wanted to explore the limits of our domains. So I was not giving exact instructions to the composer what to play. Instead, we had long discussions where I was introducing my work and explaining effects in physics with some drawings. Then he could use it completely freely as an inspiration. I explained him different frequencies and he translated that into music notes on a spreadsheet, adding numbers from the physical systems. These are breaking the rules of western music but modern musicians are already breaking those rules. He was using these new tones and it was his challenge to make it sound good. 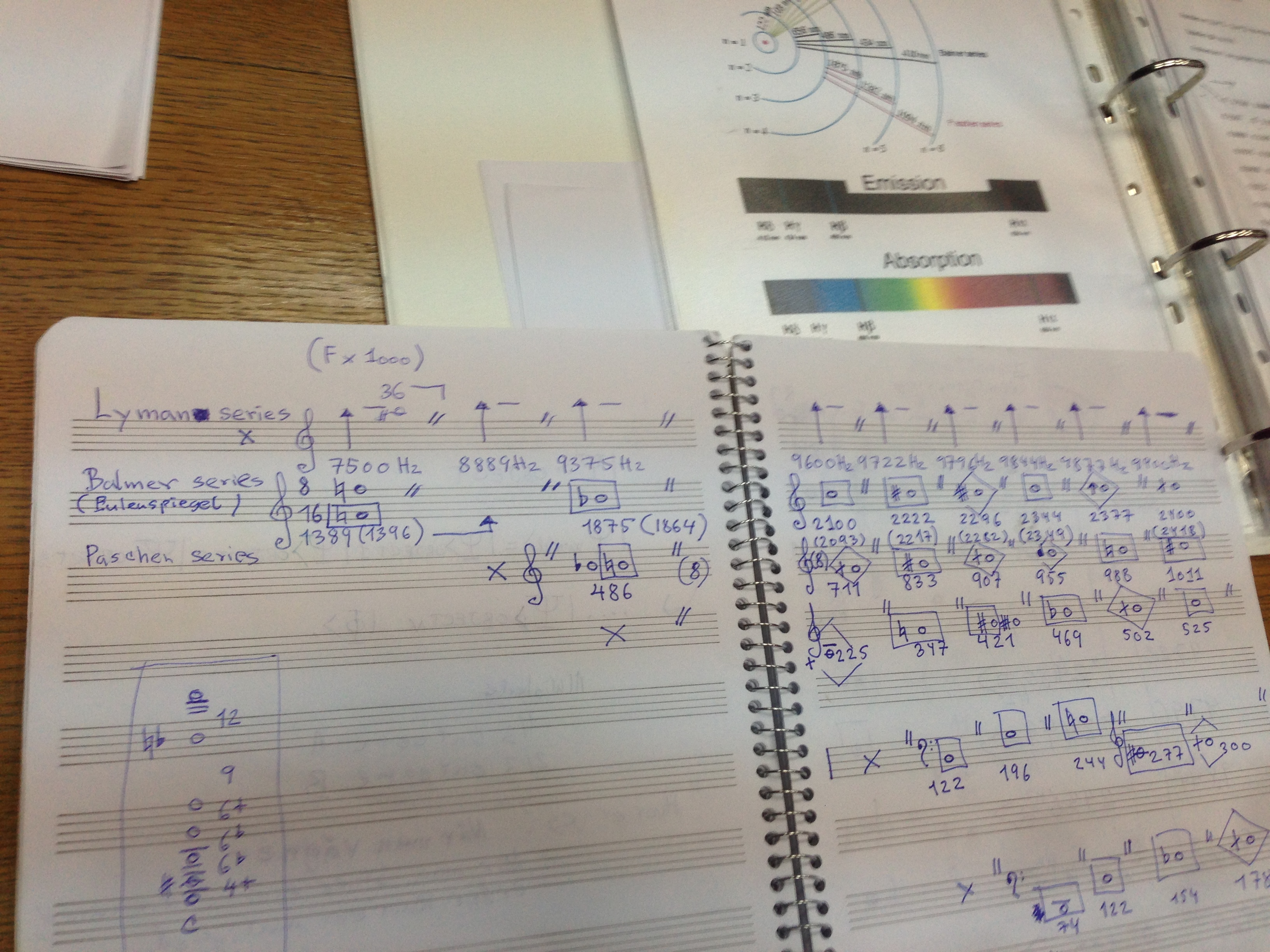 The physics-related outcome is limited in this project. It is, on the practical level, there to get the project running. However, as a theoretical physicist, I hope to get new ideas. I don’t get ideas from equations, at least not the good ones. Music is a new sort of visualization of the physical phenomena. Why not hear what happens instead of seeing?”

Another goal of this project was to develop new instruments. Playing frequencies observed from the physical phenomena requires special tunes. Just like that a new “quantum instrument” came to the canvas, a hybrid piano which Klaus worked on.

What is it exactly?
K: “The quantum instrument is an optical readout. Our sound engineers wanted to build one themselves and make it so small that you could transport it in a shoe box. We just need to roll it out on the piano and you can actually play the piano in a regular style, while computer signal can translate the keys into whatever you like. The regular piano will play the keys on its strings but the hybrid piano also has additional overtones.”

Some pictures from our Aarhus experiment were hung on the walls as people walked to see the performance in March.

What do our atom clouds have to do with Quantum Music?
K: “I was inspired by the vibrating frequencies coming from the Bose-Einstein condensate. It already appeared in the earlier concerts and even more in the upcoming project. Our friends in the lab could record those frequencies with a camera, then take the signal and send it to a loudspeaker where you could actually hear the Bose-Einstein condensate which originally did not make any sound in the vacuum. We took real data from the Aarhus lab and used it to create the sounds which the pianists will play at the concert. For the Aarhus concert in March, we had a great venue with the chance to visually present the atom clouds from which the music was coming from in an indirect way. We were not explaining the details of those clouds but people could see these mesmerizing, almost psychedelic clouds. We have big ambitions for the upcoming concert to further develop these visual effects with artists.”

What is the future of the Quantum Music project?
K: “In the near future, we are going to have a concert tour this autumn, as part of the European project. The composition for the concert is finished and two internationally famous pianists, LP Duo, are going to play the hybrid piano. We are connecting not only classical but contemporary and electronic music with Quantum Physics, and LP Duo is also composing a couple of short pieces for the performances this autumn. Aarhus was not originally in the plan because that time I wasn’t on the project but if we can find a venue, we will make it happen. Otherwise, there is going to be a concert in Copenhagen, the Netherlands, Slovenia, Serbia and maybe more. The schedule is not completed yet. For this tour, there is going to be more digital visualization compared to previous concerts in March. It will also differ in each place. For example, in Copenhagen, we team up with the Royal Dance Academy for a joint performance. If we manage to include Aarhus in the schedule, probably I will have a bigger role with physics talk.
In the long run, I hope to have a lifetime collaboration with these people in the project.”

Keep an eye on the Quantum Music website for upcoming concerts! Wherever you are, this extraordinary experience might knock on a door nearby you in the future.

The Quantum Music project was funded by the Creative Europe Programme