Today our lab pioneer, Romain Mueller, is defending his Ph.D. thesis. We thought that it would be a great opportunity to talk about his contribution to Science at Home and bring our readers down to the Physics Department’s basement. That’s where the actual quantum magic takes place.

Romain’s usual day at work is not very usual, as you will find out later. It starts around 8:30-ish with switching all the lasers and electronic parts, when waiting for them to warm up. Then follows a morning check-up for the previously ran sequences. After that Romain discusses the agenda for the day with his lab mates and plans accordingly, spending the whole day measuring. That is a typical measuring day, but sometimes you have a change-the-whole-set-up day, which is a bit less fun, according to Romain. 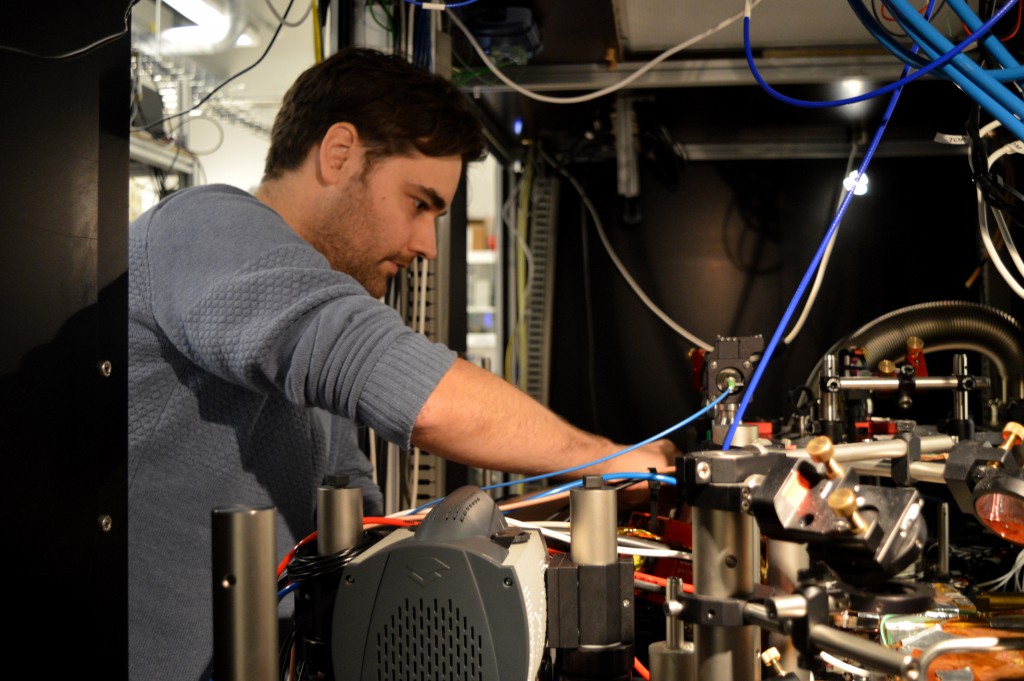 A few weeks ago, I met with Romain over a nice cup of coffee in the canteen and we started chatting about how he came to Denmark. Romain is half German, half French and grew up in the Northern Germany. He already worked in a lab while doing his Master studies at Heidelberg University. After that, he started to look for a place to do his Ph.D. and came in contact with Jacob Sherson who was just about to start his own experiment. That’s how Romain came to Aarhus and became the first student to join our lab. Just in 2012, when Romain joined Jacob, it was more of an empty room than a lab, but we will get back to it in just a second. So, what is Romain’s role in ScienceAtHome, you wonder?

Romain: “It contains a lot of different tasks to build an actual experiment. So for instance, what we want to do is manipulate atoms with a light and magnetic fields and cool them down to the really extreme cold. In order to do that, you need an extremely good vacuum, which has to be way better than what you have in space. That is already one difficult task to do. Also, you have to design something which could go into this really low vacuum regime and then you have to consider which pumps to use, decide on special viewports (windows), which allows you to look into the vacuum chamber, etc. After that, you have to test it, of course. So, it’s all this testing, buying equipment, testing again and conceptually thinking about everything. It’s highly complex to set up. What is more, you have to keep in mind that you want to put a lot of different technology and it has to fit spatially. That’s been one of my major tasks – to have a concept of what we want to do and get everything together.”

Although Romain talks about it in a very relaxed tone, trying to make everything seem very simple, you can take a look at our lab pictures and see the level of complexity these tasks entail. Can you imagine setting this up on the empty table with no manual? No, me neither. Naturally, I asked Romain about it:

“So, how difficult was it to build everything from scratch?”

R: “Oh yes, it was extremely difficult to start, especially because I was the only one. Sometimes, I had days when I had troubles because I didn’t know how to continue. However, I was fortunate enough to have people around me who could answer my questions, give an opinion or share their expertise and help me out. It got easier when the lab team started growing and more people started working next to the experiment. Our team is really great, that’s part of the fun. “

What is more, Romain says that the lab is still under construction: “Of course we can do some experiments: cooling down the atoms and observing them in the quantum regime in a sort-of-non-destructive way, which is rare. Normally detecting atoms is destructive. So, these experiments we can already do, but with regard to our high goals – we are still working on it!” 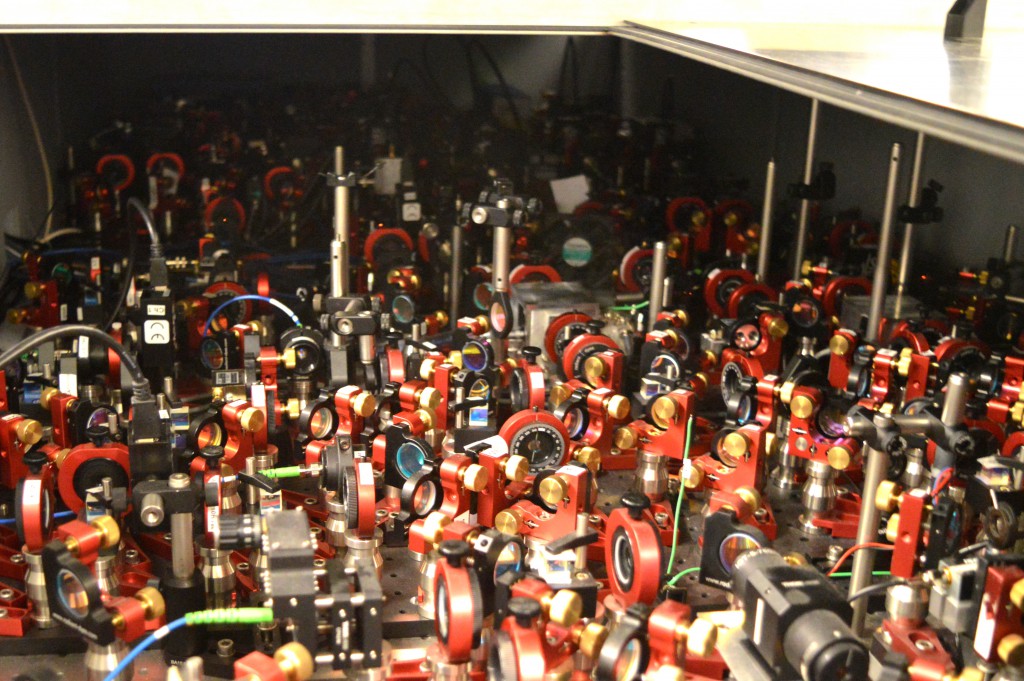 “Which part of your work is the most challenging?”

R: “The most challenging? Everything is very challenging in the lab, but that is exactly what I like- challenges. You wake up and there is a new challenge every day, something unexpected usually happens. That is the downside of such a delicate experiment. For instance, once we had some temperature issues in our lab: the climate system was not working well enough and that cost us around two months of work to fix. You have to find solutions to problems all the time and you have to like it, otherwise, you will get frustrated very fast.”

“What did you think of the idea to introduce citizen science games to solve the real lab problems?”

R: “I think ScienceAtHome games are very cool, I tried them myself. The game of transferring atoms is something that we can easily replicate in our lab (hopefully!). We are looking forward to the time where we will be able to take players solutions and implement them.”

While listening to Romain talk about peculiarities of the lab and all the technical details, you can clearly hear his dedication to the project:  It simply captures me because I was the first one to be in the lab, so all the screws there – I touched them myself, I was always present. You get connected to it, especially when you see the results. And also what is very nice – you get to do so many different things, no day is like the other. And the team is great, we all do different things, which is really awesome.

Romain Mueller’s Ph.D. thesis “A new experiment to probe and manipulate quantum systems“, entails all the technical details of what it takes to set up an experiment like this. In Romain’s words: the thesis presents “the design of the imaging system which will allow resolving single atoms in an optical lattice.” We hope his well-documented 3 years of hard work will become a great help for other physicists.

By reading Romain’s Ph.D. thesis introduction you can feel his great gratitude for everybody who joined him on his journey. Likewise, we are very proud and happy to have people like him on our board. Good luck, Romain! We are looking forward to your future experiments.

Soon enough you will hear about other lab geniuses at Science at Home and different interesting experiments going on. Stay in touch! 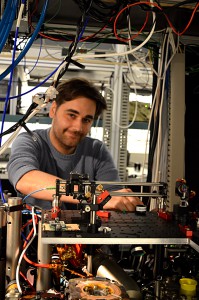 The Lab Pioneer
Go back to
Dismiss
Report Problem