We have great news for virtual reality (VR), quantum physics and Murakami enthusiasts! This week, they will have a unique opportunity to experience an interactive virtual reality exhibition in Aarhus called Quantum Breathing.

Quantum Breathing is a collaboration between a renown artist Libby Heaney and ScienceAtHome, and it is a part of the official program of Aarhus European Capital of Culture 2017. In this exhibition, Libby questions our relationship with seductive new technologies and our identity in two virtual worlds inspired by the work of Haruki Murakami.

Also, did we mention that you get to hang out with golden unicorns and throw skulls into a pink quantum river? To learn more about the exhibition we sat down to talk to the artist herself. 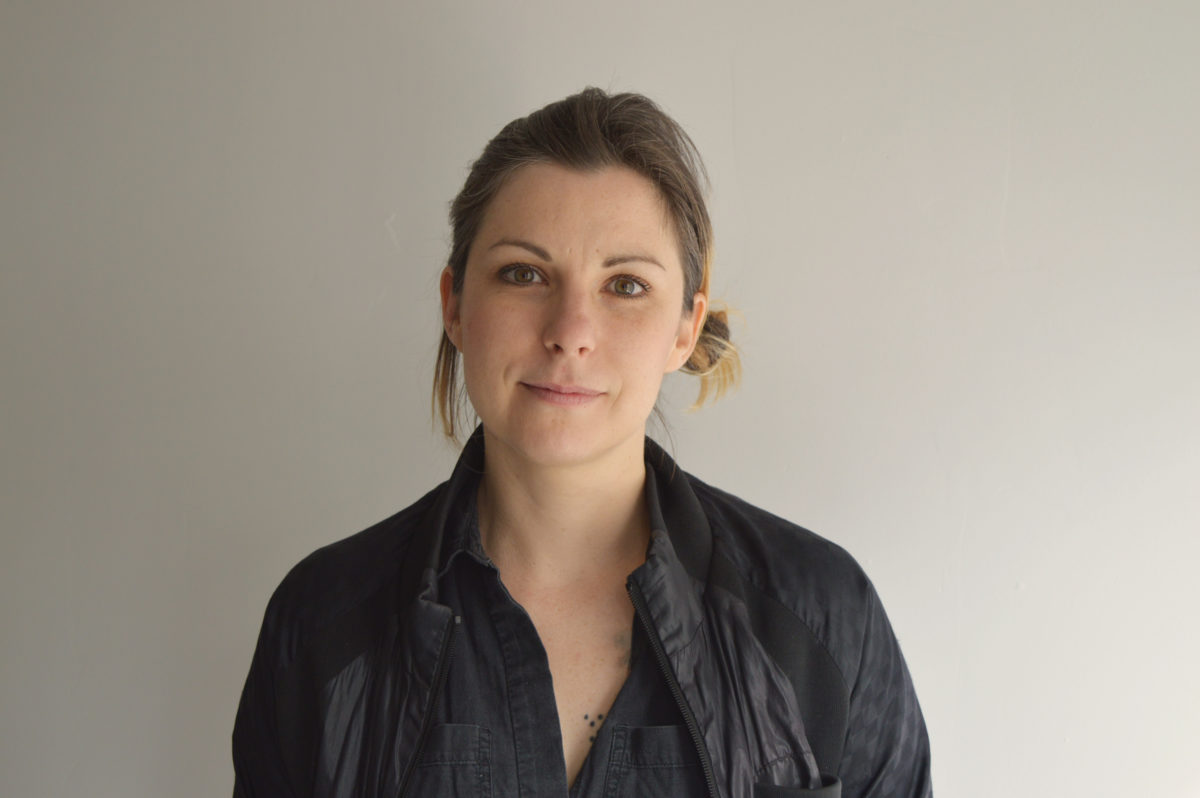 How did Quantum Breathing come alive?

Libby: "It all started when Pinja (Head of PR at ScienceAtHome) approached me around two years ago. She had an idea to create an art project as a part of the Aarhus European Capital of Culture. Shortly after that, we started discussing Quantum Moves and quantum computing. What I’ve found really interesting about ScienceAtHome is that you are using quantum physics not just to do quantum physics itself but in the social and behavioural aspect as well. Pinja also came to London and did some work with my students. It was another example of using quantum physics as a starting point to explore other subjects, like the game design (you can read more about ScienceAtHome collaboration with RCA here).

After initial discussions, we came up with an idea of using VR because of the way it embodies the game world and the interactivity aspect of it. There is a lot of research and complexity in the artwork. It takes a lot of time to discover how to tell the story you want to tell.

Then, we started producing it. In Murakami’s book “Hard-Boiled Wonderland and the End of the World” (which serves as a main inspiration for the artwork) there is “a map of the subconscious” featuring a town with a wall, river and a pool at the end. Murakami fans will notice that I’ve taken a lot of objects and elements from the book. So, the golden unicorns, shadows, the skulls, the river are all in the VR world. I wanted to create a quantum river so, Jesper, one of the physicists from ScienceAtHome, used the game engine of Quantum Moves to create a river that produces the ripples (if you throw something in it) that follow the Schrödinger equation."

Could you tell us more about why you chose Murakami’s work as an inspiration?

L: "One of the things I noticed when I used to be a physicist is that physicists don’t really take the time to question the impact of their science. For instance, in English, there is very little debate on the internet about the ethics behind a quantum computer. VR technology also has a lot of ethical questions around it. Some of them are being researched, but not enough.

In a sense, Murakami’s book is also about the ethics of technology and he uses the ideas of parallel worlds to explore some of these questions. This kind of exhibitions can act as a conversation starter about the ethics of the new technologies. It can be a chance to bring these issues to the forefront." 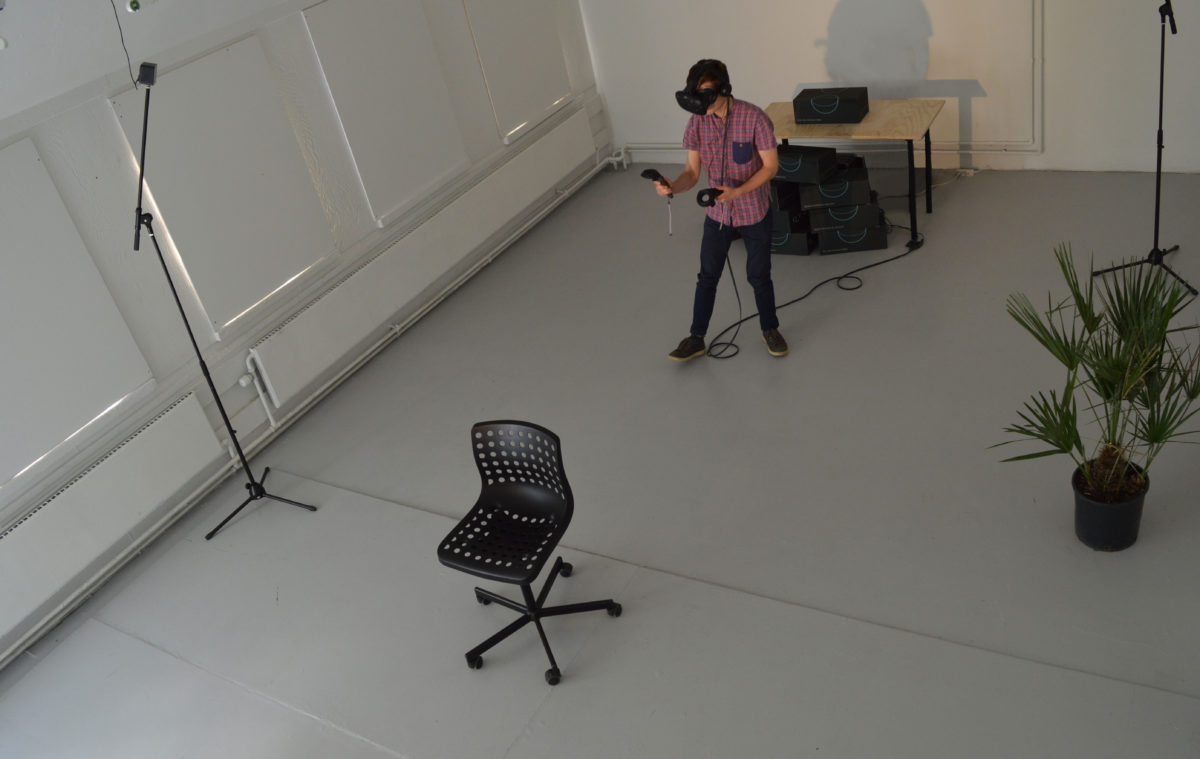 What is the role of quantum physics in this artwork?

L: "I don’t think that anyone will look at any artwork and think: “Oh, that’s quantum physics!” That’s not going to happen because nobody knows what quantum physics looks like. It is impossible to represent it. But what you can do is to use it as a metaphor to explore other areas or describe other things. It basically serves as a new lens."

Is there a particular message you want your visitors to take away?

L: "Most of the art has flexible meaning because if you fix the meaning you are lecturing, not making artwork. In my mind, you have to keep it open and allow people to discover things themselves, but also try to not be too abstract. So, it’s about finding a balance of conveying information and allowing people to take what they want.

After I saw the way people interact with the piece, I can say that people take it very differently, depending on your background (who you are, what are you trained in, what your expectations are), we all read symbols differently. Some people think it’s a computer game, artists see it as art, physicists are looking for quantum physics in it. 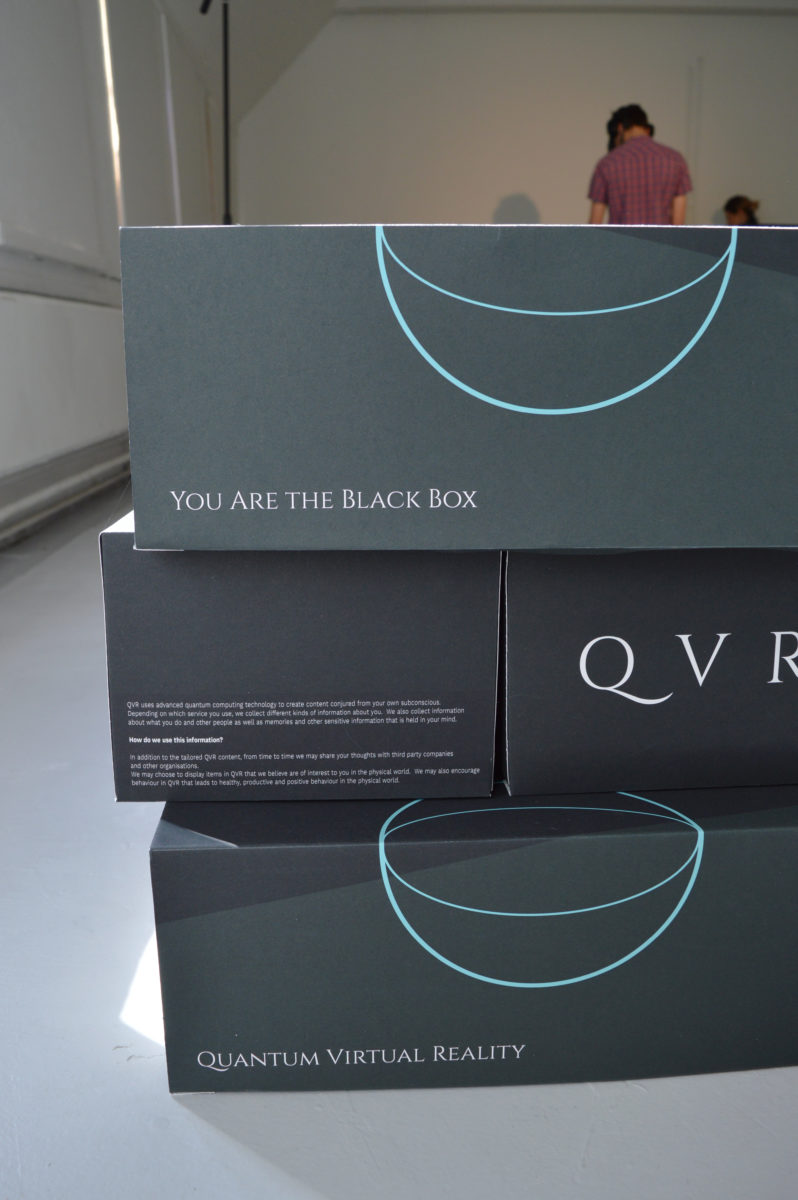 Every piece of technology comes with "Terms and Agreements" printed in a small print. Make sure not to miss it!

The theme of power and identity is also there. For instance, everyone is so seduced by the virtual reality element that no one really takes the time to read the small print which is crucial for the artwork. It acts as a metaphor for how we act when we are introduced to a new technology–we are fascinated by it and don’t think about the negative side of it. There is always a good and bad side with technologies. Always.

There are a lot of references in the artwork and people won’t necessarily know them and that’s ok. But I think it’s important to explore it quite deeply, there is complexity in it."

If you need more convincing of why you should come and see Quantum Breathing, hear it from Libby herself:

The exhibition is open every day 14:00–18:00 until 12th August at “Non–space” (Rosensgade 11, 8000 Aarhus). For more information about the event, visit Quantum Breathing Facebook page.